Do gay men really worry more about their love life than straight men? Yes, a new study by EliteSingles says, but it doesn’t make them any less happy overall.

Dating can be tough at times, but how we cope with the knock-backs and dead-ends can define our future successful relationship. Whilst gay men are used to counseling female friends through the woes of dating, is there anything they can learn from their straight brethren? Here are four key ways in which gay men think differently when it comes to dating…

Gay men lack confidence: In the study, gay singles scored themselves a staggering 3.5% lower than straight men on how confident they feel, and there’s no easy explanation for why there’s such a big difference. Lamar Dawson, writing for The Huffington Post, says “Whatever your reason, it’s hard to let others in and it’s hard to accept the love we deserve. The most important thing to know is that you are worthy of love and you have love to give.”

Gay men feel more insecure: Gay men also scored themselves 3% lower on the ‘secure’ scale. Why? Feeling insecure can encompass a great number of things – feeling jealous, paranoid and having trust issues are perhaps the most common manifestations, and these can be hangovers from past relationships. But, most often, gay singles actually feel more insecure about themselves, and this has much to do with internal conflict of ‘what you’re meant to be like’ and ‘who you are’.

Gay men feel more misunderstood: There’s nothing more personal than dating – it exposes our true selves to the world, in the hope that we’ll find someone who can accept us for who we are. Feeling self-conscious can really complicate things! Careful cultivation of our own sense of self will always help you feel more prepared for finding ‘the one’.

Though it does seem that gay men may worry more, the same study also asked respondents how ‘happy’ they felt and produced no significant difference between gay and straight men. Less than 1% scored themselves lower, which would suggest that worrying about our love life more actually has little impact on our general happiness.

Also undertaken in the United Kingdom, the study had remarkably similar results there. 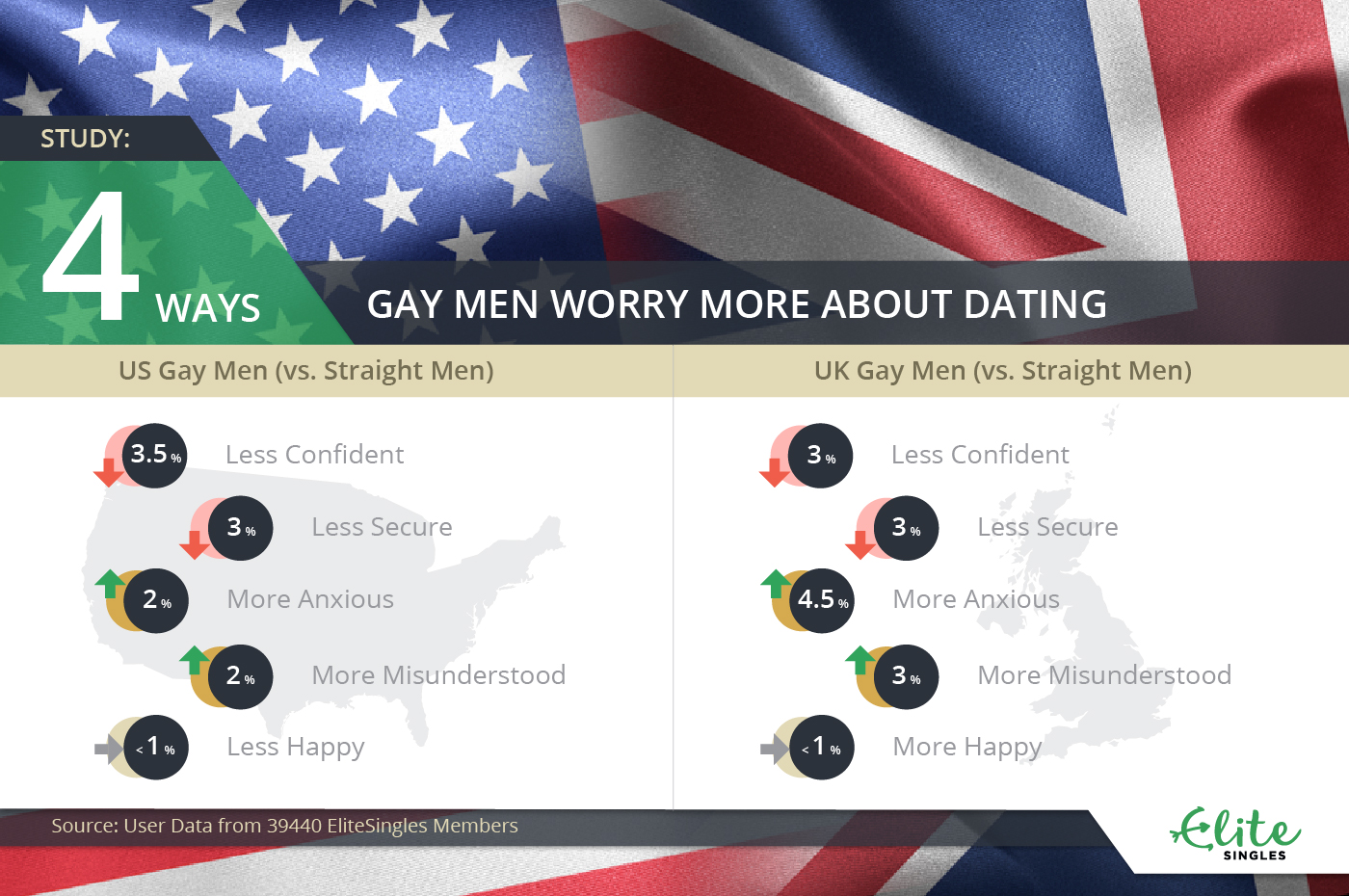 EliteSingles’ resident psychologist Salama Marine had this to say: “Lack of confidence can come from a difficult former relationship, or even stem from childhood,” before adding “this can be a real problem whilst dating.”

1. Make a list of all your qualities and be honest with yourself. Write down everything you have to offer someone in a relationship. For some people, this exercise can be really helpful because they can – literally – see just how valuable they are on the page in front of them.

2. If you feel that it’s not enough to realize this by yourself, why not talk with your friends? Just by asking simple questions like “Why are you my friend?” and “Why do you like to spend time with me?” you can realize your own value in other people’s eyes and learn to believe that you are a good person to know.

3. Fix reasonable objectives. When people want to change, they tend to forget that it needs to be done step by step – it’s important to fix doable objectives to avoid any disappointment. For example, it’s not easy for everyone to just walk up to someone they like in a bar and start talking to them. In this scenario, online dating can be really helpful; it can help you to realize that meeting and dating completely new people is not a big deal – you just need the practice!

Read more: Wondering how to make a man fall in love? Discover how to get their hearts racing.